Witness to the 1997 Presidential Inauguration

January, 1997.  About a week before the inauguration, I was watching news reports of all the preparations and it suddenly dawned on me that I'd like to see all of this firsthand. So I got a couple personal days off from work and made reservations at the Capitol Hill Guesthouse. For anyone familiar with the layout of Washington DC, this is the neighborhood of rowhouses just east of the Supreme Court building. It was a Bed and Breakfast that consisted of approximately 7 bedrooms and shared bathrooms. For $50 a night and walking distance to the Mall, that was good enough for me! 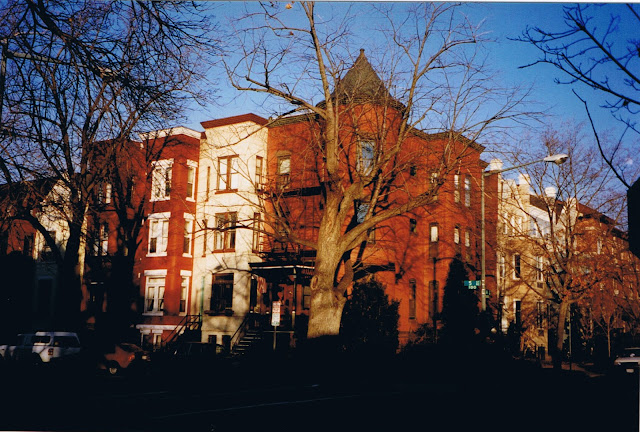 I also had to get a pass from my Congressional representative's office for access to the Mall during the inauguration. I did not have any invitations to any parties. I love taking long walks. I was happy to be able to just walk around and observe all the activity.

The morning before the inauguration, I drove to Washington and checked in at the Capitol Hill Guesthouse ("CHG" from this point on). It was literally just a few blocks from the Supreme Court. I spent the first evening walking around Washington. The Capitol Building, naturally, was completely surrounded by fencing and lit up by bright lights for TV cameras. I was able to get fairly close to the VIP seating area for the inauguration so I could see the inaugural platform up close. 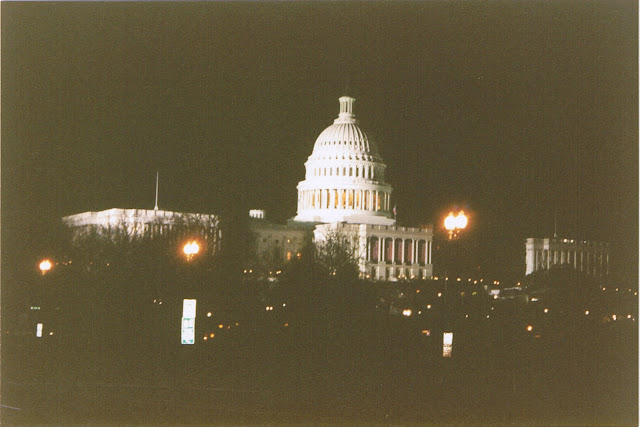 From there I walked near the White House. I don't really remember what I saw of the White House that night. The good stuff came the next night. More shortly.

I walked along Pennsylvania Ave (the parade route) and observed bleachers that had been set up, fencing for security in some areas, and objects that had been moved around to allow for the parade. Had dinner at a TGI Fridays and went back to the CHG for the night.

Inauguration was scheduled for 12 noon. I got up and headed over to my Congressional Rep's office around 9:00 and got my pass. I walked along the Mall as they were closing up access to the fenced sections. I found my area and basically stood there for the next couple of hours. For those familiar with Washington, I was in the section between 4th Street and 7th Street. It was very difficult to recognize anyone on the platform, but through the aid of the giant TV screen I could see what was happening. I had a portable radio with headphones, so that was my method of following what was going on. I don't remember if they had a PA system or not; it seems like they would have. The only person I could identify on the platform was Hillary Clinton because she wore a pink outfit that stood out. 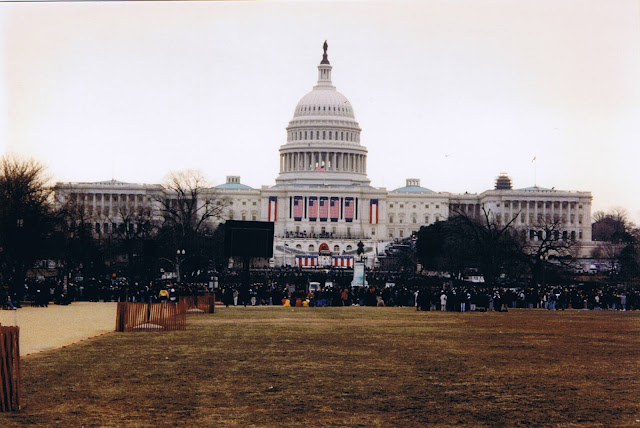 Again, memories are fading, but I do remember there were choirs and bands that kept us entertained. I certainly remember that Billy Graham was there. Closer to noon, Gore was sworn in as VP and then Clinton was sworn in as Prez for his second term. At that point, the sounds of a 21-gun salute echoed throughout Washington.

I left during Clinton's long-rambling address to stake out a spot along the parade route. That was another long wait as Clinton did not keep to his schedule very well. The parade started late. I stood there long enough to see the VP and Prez limousines go by plus about 10 minutes worth of the floats. 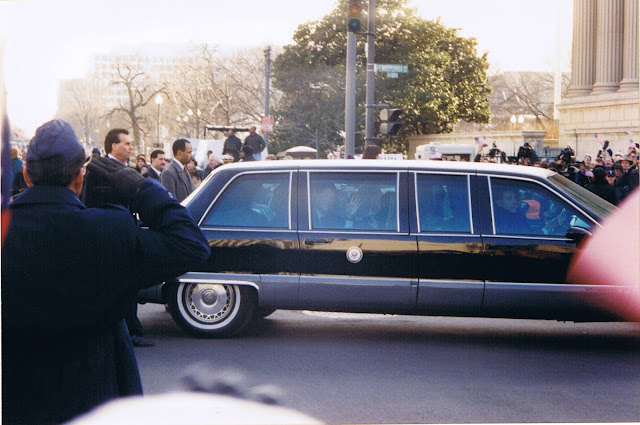 By then my back and legs were aching from standing in one spot so long that I decided to walk some more.I saw many of the parade staging areas set up on the Mall. 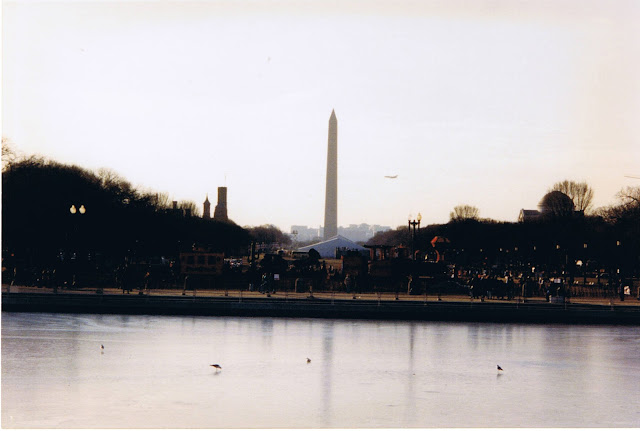 I went back to the CHG for a restful break, then headed out to the Capitol. This time, I was able to get into some of the formerly secure areas outside the Capitol. I took some pictures of the area where the inauguration had taken place. 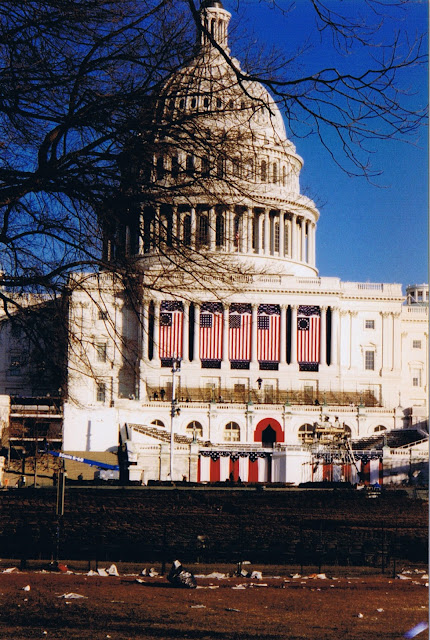 I took a bus to the area where Ford's Theatre is. I couldn't get in, but walked around a bit. I bought a "Clinton/Gore Inauguration '97" button. A homeless Vietnam Vet offered me some tourist maps.

By this time the parade was finished so I headed over to the White House and walked around the front, where the President's viewing stand was set up on one side of Pennsylvania Ave (right side of the photo) and a makeshift building was on the other side where the press and networks had their booths set up (left side of the photo). Some, like C-span or CNN, were still broadcasting from there. I could see the backs of the talking heads. 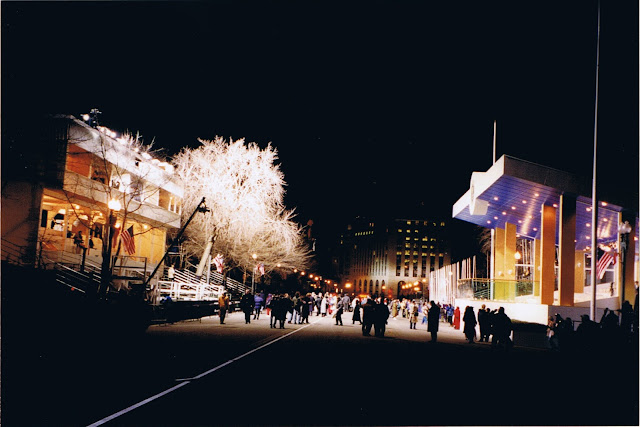 I took several pictures of this area, including VERY closeup shots of the President's viewing stand. 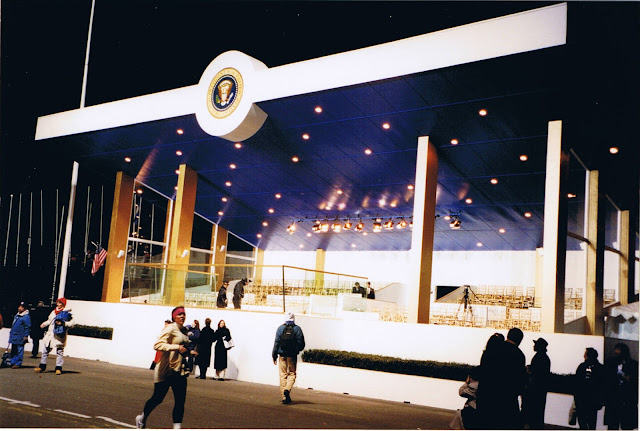 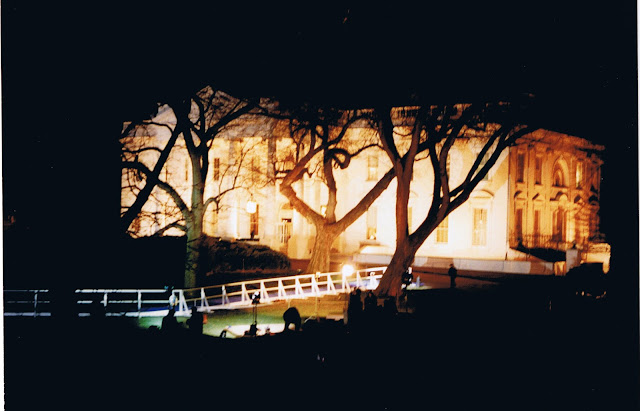 I got up to the top of the VIP bleachers and took pictures of the White House behind them. Security was there, but they were generous. After I had been up on the bleachers for several minutes to take it all in, one cop said, "OK, you've been up there long enough." So I got down and started retracing the parade route along Pennsylvania Ave, back towards the Capitol. The bleachers nearest the White House all had required VIP passes or you had to pay for the tickets to sit in them. But these were the people who had been treated to the Clintons and Gores getting out of their limousines to walk the last few blocks.

Through the night, the the sounds of sirens frequently reverberated around the city as various VIP motorcades moved from one inaugural party to another. I know that the Clintons visited many of these parties but I never saw their motorcade.

It was an interesting experience. I'm glad I was able to do it but I'm not sure I'd do it again. Been there, done that I guess. It was cold and it involved a lot of standing around and waiting.

The next day, I capped off my long weekend by stopping at Gettysburg on the way home to Rochester, NY. 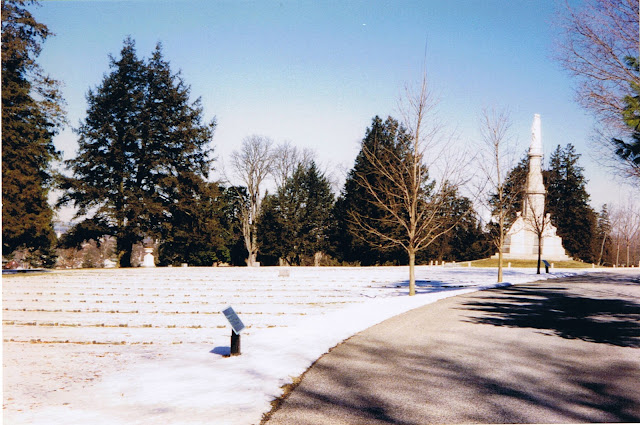