My First Elvis Record, with a Surprising Twist

I wonder how many people remember record-of-the-month clubs. You would sign up to receive 8 record albums in the mail for free, or a penny, or some silly, baiting amount. In return, you would have membership in a club where you were obligated to buy a certain number of records after that within a certain amount of time. When I was in high school, I joined the RCA Record Club.  I was a huge John Denver fan at the time and purchased several of his albums, along with other RCA artists that I liked.

I had recently been exposed to a few songs by Elvis, so I decided to buy one of his albums.  It was this one, "Elvis, a Legendary Performer." 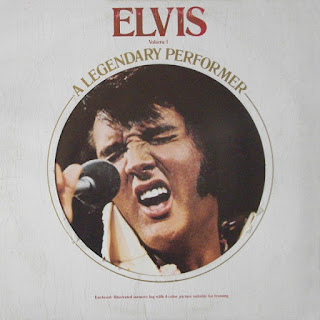 The day came when it arrived in the mail. I took it to my bedroom, put it on the stereo and put my headphones on. As I listened, I read the booklet about Elvis that came with the album. I was mesmerized by his music, the pictures in the booklet, and the story of how he shot to fame.

I must've played through the album several times. I reflected upon his popularity and I remember thinking, "I wonder how the world will react when the day comes that he dies."

It was a prophetic thought and I didn't have to wait long to find out how the world would react.  The date my first Elvis album arrived, and I layed on my bed listening, was August 16, 1977. Elvis died that day.