I was inspired to write about Jenny based on the caption I wrote for a picture I posted of Jenny and me on my Facebook page today. The caption read, "We have been through a lot together." Jenny is a grand old lady who came into our lives on January 1, 2005.  That makes her 16 years old, or 112 in dog or cat years. 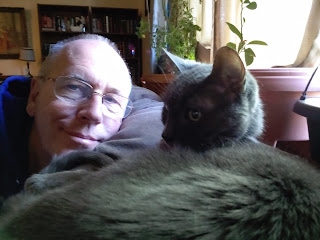 Shortly before that, we had been without a cat for a couple years when I was helping my sister with a phone line in her house.  I was face down on the floor, doing some wiring, when her cat came up to me and started sniffing my face.  At that point, I knew I  missed having a cat in my house.  So, on New Year's Day, off we went looking for a pet store that was open.

I already knew the name.  Previously, naming a pet was always a family activity, but this time, since I was the one that wanted a cat, the honor went to me.  Being an aviation fanatic, I decided on the name "Jenny" since it was the nickname of a popular World War I training airplane.  All we need to do was find Jenny in the pet store.

Jenny adopted us.  While checking out the different kittens, Jenny was the one who had a hypnotic stare.  She would gaze into our eyes and not look away.  Her spell was successfully cast upon us and we obediently chauffeured her to her new home.

Garnering the interest that a pet always inherits from a new family, Jenny became the frequent subject of our daughters' art and photography pursuits, as well as a new playmate for our rambunctious Chocolate Lab, Fudge.

At full size, she is a small cat.  She is solid gray with a black nose. She has a delicate way of dabbing her nose as she sniffs around. She doesn't show much interest in being held or cuddled, but she will race to the door to see who is there, just as a dog does.  When she sits, she elegantly wraps her tail around her base, as if she were a statue to be idolized.

As I said, Jenny and I have been through a lot together.  In July, 2006, my wife, Mary, unexpectedly collapsed from a Sudden Cardiac Arrest. (A full description is here)  As I was on the phone with 911 and trying desperately to save her life, I have a vivid memory of being aware that Fudge and Jenny were on the other side of the living room, watching the scene.  In the 10 days that followed, not knowing if Mary would survive or be left a vegetable, both Fudge and Jenny were my solace when I came home from visiting her in the hospital.  We lived in a townhouse at the time, so I spent time with Fudge in the dog yard, and Jenny would always hang out in the living room with me or crawl around on my bed.

Mary beat the odds of a 5% survival rate, for which she received some media attention over the next few years.  On one such occasion, the Democrat and Chronicle wrote a story in which they wanted a photo of the two of us sitting in our living room.  Unbeknownst to us, Jenny managed to steal the scene by capturing the photographer's attention off to the side.  Imagine our surprise and laughter when we opened up the newspaper to see this picture! 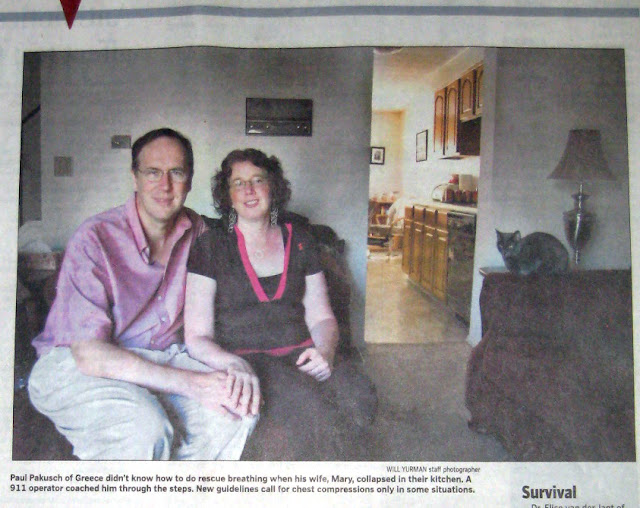 Sadly, Fudged passed away not too long after this, but another daughter's dog, a hyper Rat Terrier named Peanut, came to live with us. The prim and proper Jenny now had a newly charged up bundle of energy to reckon with.

In February of 2008, my daughter, Melissa was home alone with Jenny and Peanut when the townhouse next door caught on fire. (A full description is here)  All three of them were safely moved to the apartment complex's community room while the fire was put out.  I left work early to get home because of this.  I'll never forget seeing Jenny explore the entire community room; she was on the floor, on tables, walking across the kitchen counter, and up on top of the cupboards. Ultimately, the kitchen next door was destroyed and we received only smoke damage, but the lingering smell was horrendous.  It was determined that we needed to temporarily move out.  The first couple of nights were in a nearby hotel.  Jenny and Peanut took to running around the hotel room like a couple of little kids excited about being on vacation.

As I said, Jenny was never a very cuddly cat, but we did notice a change in her demeanor once, after being out of town for a week and a half.  We figure she missed us; she started hanging around us more than usual, and seemed a lot more willing to have us pet her. Peanut and Jenny's address has changed multiple times, as we had gone from one apartment to another over several years.  In 2015, we bought a house again.  Jenny and Peanut, had a much bigger area to play and explore.

In January 2016, big changes happened.  Mary decided to end our marriage, so she moved out. The reasons are between us, but suffice to say, we have three grown daughters, great guys in their lives, a grandchild, a step-grandchild, and another grandchild on the way.  So, even though we are not together anymore, we still get along fine.

But a long-time marriage coming to an end does not happen without a lot of emotions going awry.  For much of 2016 and 2017, I was on the wildest emotional roller coaster ride of my life.  I hit stratospheric heights and ocean-deep lows.  While I was alone in my new house, which I came to dub, "The Lonely House," I had Peanut and Jenny.  The first couple of weeks, I would just get in my car and drive aimlessly with Peanut.  Jenny would hang out in the room with Peanut and me whenever I was home. I bought a guitar and started lessons to give me something to do.  Peanut and Jenny were my audience.

At first, my singular goal was to keep the house and keep the two pets.  As winter became spring, and spring became summer, I took my first tepid steps into dating, something I hadn't done in over 34 years.  Melissa and her family moved in with me, but by early 2017, I had decided I needed to put all responsibility behind me and get a fresh start by selling the house and paying off all my debts.  Sadly, the pets would not come with me.

Melissa found a new place to live and Jenny went with her.  Melissa has always loved Jenny; at least I can still visit Jenny whenever I want.  I still feel very attached to her.  We found a wonderful, loving family for Peanut, who has other canine playmates, and she is very happy these days. I miss her, but she has constant companionship now, so she is better off than being alone a lot.

I think most of my friends know what happened since 2017.  Once I met Stacey, my wild emotional roller coaster ride gradually settled down and we are now happily married.  It was a package deal, though.  I now have Mitten and Oreo in my life, too!
at June 07, 2020 No comments: