Road Trip Across the USA During Covid Outbreak

With more time off in the summer of 2020 than I've ever had in my adult life, I was anxious to go on a trip. The restrictions placed because of the Covid situation meant that I should choose an area where the infection rate was low. I had a window of about 2 1/2 weeks to complete this trip before other responsibilities meant I needed to be home. My wife, Stacey did not have as much time off from work so she gave me the blessing to go by myself.New York State Governor Andrew Cuomo had started putting some states on a quarantine list; if you were coming to New York from one of those states, you were supposed to quarantine yourself for two weeks upon return.I wanted to avoid those states.

For the westward part of the trip, none of the states along the northern border of the U.S.A. were on the list. They included Pennsylvania, Ohio, Michigan, Wisconsin, Minnesota, North Dakota, Montana, and Wyoming. They all had low rates of Covid infections, so I felt confident that I could travel by myself and not be infected. I wasn't planning on interacting with people much; I only wanted to enjoy scenery.

I began my drive west on Sunday, July 5.I drove along I-90 through western New York, through Pennsylvania and Ohio. I made two short stops to visit family and friends along the way; in both cases, we practiced social distancing procedures. Once I got past Detroit, I turned north along I-75 with my first stop being Mackinac Island after sleeping overnight at a rest stop.No automobiles are allowed on Mackinac Island. I took a ferry boat to the island, rented a bicycle and spent a few hours riding around. 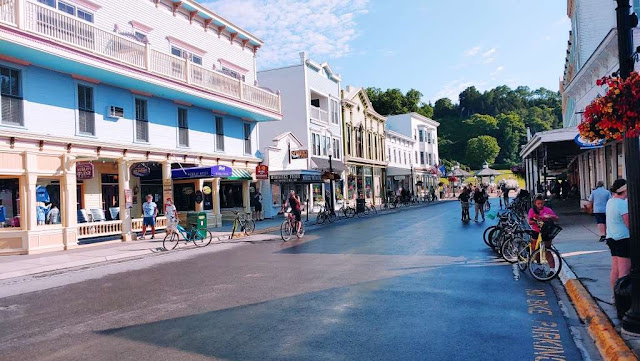 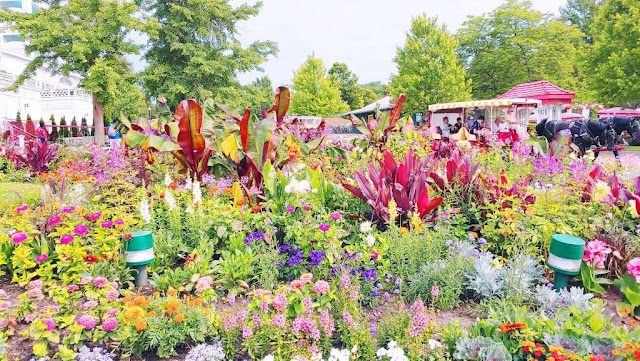 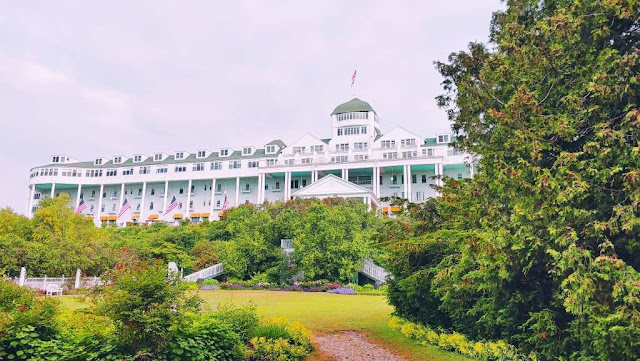 Next, I headed west across the Upper Peninsula of Michigan, a popular tourist area filled with forests, small lakes, tiny villages and campgrounds. I stopped frequently to enjoy scenery and take pictures.This began the pattern for the rest of my journey. I drove through some heavy rains from passing thunderstorms. I stayed at a campground on Lake Michegamme the second night and continued my journey across upper Wisconsin and into Minnesota the next day.In Warba, MN, I found a very narrow portion of the Mississippi River and stopped to take photos.It would widen out further south. 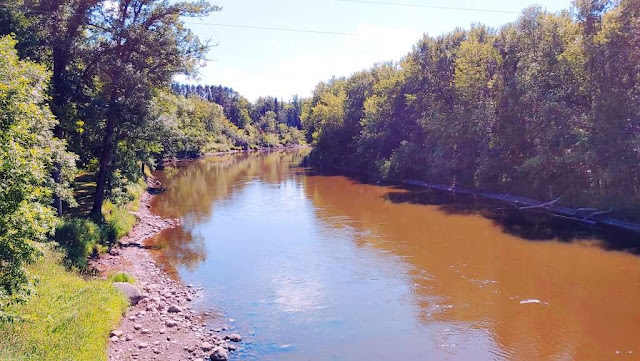 I spent the night at a rustic campground near Waubun, MN, where more storms passed through during the overnight hours.I was happy to be camping in my minivan and not a tent.I had put the seats down and laid a mattress in the back. It was as comfortable as any bed back home.I had space along the side of the mattress to place small suitcases, which became my "dresser" for this journey.A cooler with ice was by the side door, for easy access either inside or outside the van.

I continued west into North Dakota with its miles and miles of flat farmland.I had seen this many times from an airliner while crossing the country, but this was the first time I'd seen it from ground level.I was getting exactly what I wanted from this trip:Scenic views of the U.S.A. on a journey by myself.The Painted Canyon in North Dakota gave me my first views of a changing landscape carved by millions of years of wind and water.This area had once been at the bottom of a swamp, much like Florida.At the petrified forest, the shape of tree parts had been preserved by a process of mineralization that turned them into solid stone. 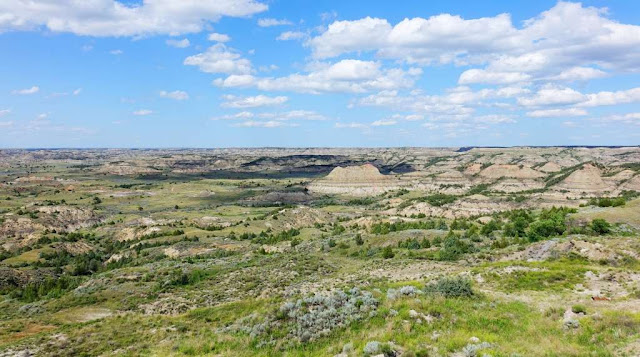 As I headed into Montana, I thought about how I'm enjoying the awesome scenery of our great country as the picture changes from flat to canyon, to mountain to valley, to river to lake to barren to grasslands to trees and more.

Idaho was on the New York quarantine list, so I turned south before reaching it. There are some amazing canyons along route 191 as you head to West Yellowstone, where I entered Yellowstone National Park.I took the time to enjoy some of the thermal activity around the park.There are many geysers.Old Faithful is not the biggest geyser nor the most regular, but it is the biggest regular geyser, which is why it gets the most attention.I set up my camera on a tripod to make a video recording of an eruption, which occurred within 10 minutes of the forecast time. 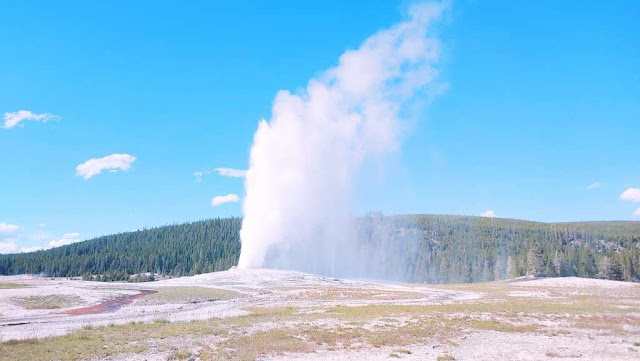 Once I was done at Yellowstone, I was hoping to find a nearby campground to spend the night. Everything was booked. During this pandemic, many tourists were travelling in their trailers and RV's.I headed out of the south entrance, hoping to find a roadside rest area, but everything was marked, "No overnight camping."With stops for photos along the way until it got dark, I finally reached Dubois, Wyoming and checked into a motel for the night.The next morning, I was blown away by the scenery I had been driving through in the dark.I kept thinking about how you can never get a photo that truly shows the magnificent scenery of areas like this, no matter how good the photo is. 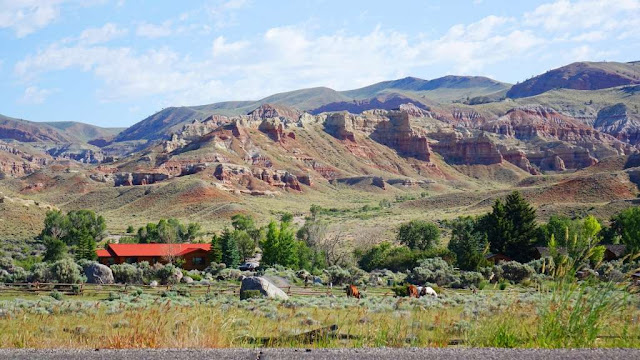 Next destination was Thermopolis, Wyoming.I had to drive through the Winding Rivers Canyon to get there.This was some of the most spectacular scenery of the whole trip, and I find myself at a loss of words as to how to describe it.Once in Thermopolis, I got some laundry washed at a laundromat and spent several hours enjoying water from the hot springs at a water park.I spent another night in a hotel.

At the suggestion of several friends who were following my adventures on Facebook, I decided to head back south the next day to see a bit of Denver, Colorado and visit some family members.Again, social distancing procedures applied.We took the opportunity to visit Red Rocks Amphitheatre, which is a popular spot for many bands.It is open to the public when no events are scheduled and you can walk around its vast spaces. 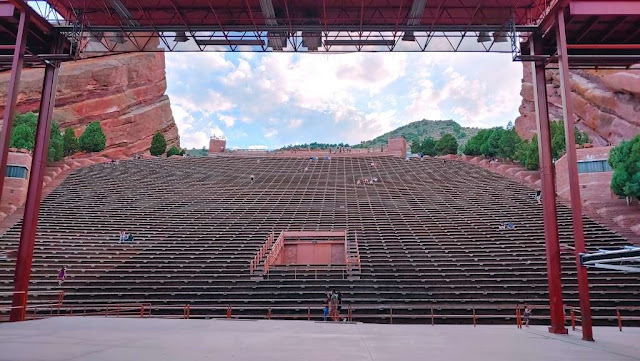 My next destination was a KOA campground next to Devil's Tower, Wyoming, made popular because of its prominence in the 1977 film, "Close Encounters of the Third Kind." It is a designated national monument and is a spectacular sight.As the sun slowly slipped into the west, my camping site was truly in its shadow.The campground plays the movie every night at 8:00. It was a surreal treat to be watching the movie while the real Devil's Tower was in sight, right behind the large TV screen. 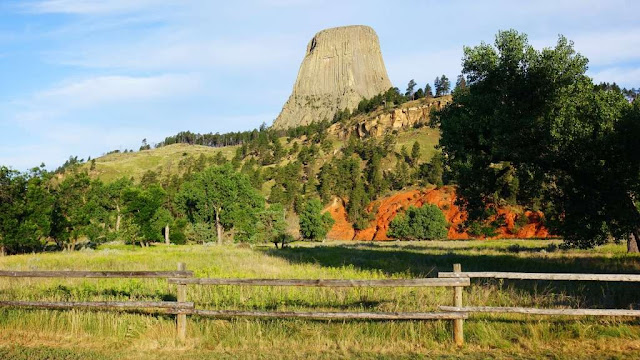 The next day I drove to Mt. Rushmore to see the President's faces that had been blasted into the rock.There's a nice path that winds around the area, so I took the opportunity to do a bit of hiking and photography from many angles.Another night at a campground, and then I visited the similar but much larger monument still being blasted out of a mountain for Crazy Horse.I say "blasted" because these are not carvings.The skilled artists and workers who created them did so with dynamite.The rock is too hard to "carve." 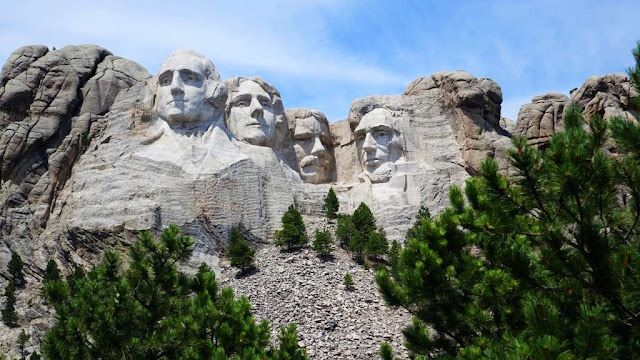 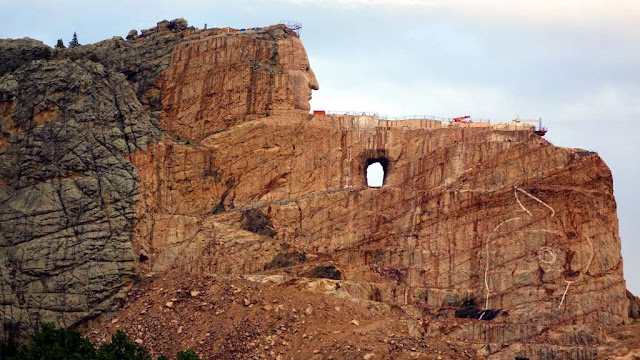 The Badlands of South Dakota would be my final major destination. I spent several hours driving along the scenic route of the Badlands.I saw prairie dogs digging their holes and playing, saw a mother longhorn goat with her kids, and I encountered a bison walking past my van at one point. 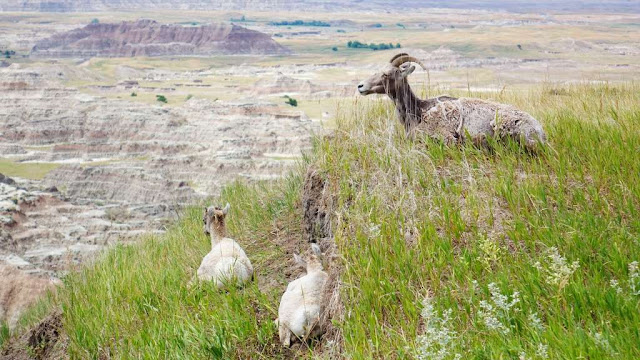 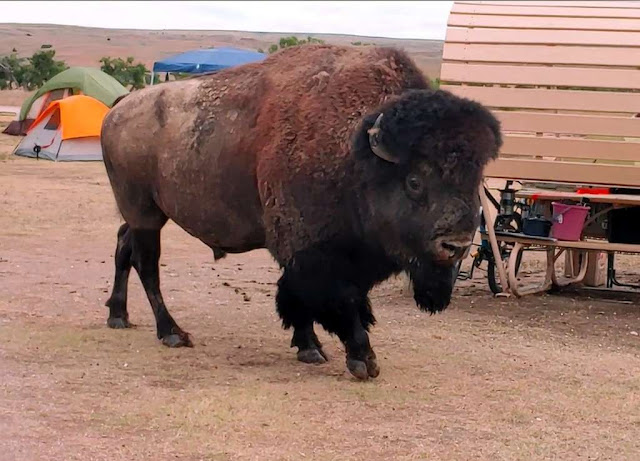 I had been paying attention to reports of how Covid was spreading across the U.S.A. and I didn't want to be in a state that would go on New York's mandatory quarantine list. I wasn't doing much socializing; I was spending an average of 10-12 hours a day by myself in my air-conditioned mini-van. My fuel, ice and rest stops were as quick as possible, with a mask where needed or required, and interaction with cashiers and hotel personnel was done with plexiglass between us. If anything, I had already been pretty much in isolation through the majority of this journey. By this point, I was in South Dakota, a good 22 hours of driving distance from home. I had already seen the major attractions that I wanted to see. My plan had been a leisurely drive back; I wanted to drive a few hours each day and stop at campsites along the way home. Three states that were in my path had been added to the list of states required for quarantine in New York: Minnesota, Wisconsin and Ohio. Up to this point, I hadn't been in any states that were on the list.I didn't know if more would be added, so I decided it was time to curtail the trip and head home the next morning.The rule was that someone driving, like me, was supposed to go onto a website, fill out a form as to where you had been, and then self-quarantine for two weeks.Exceptions included people who were just driving through and spending less than 24 hours.I decided to split my 22 hours of driving time into two days.I would get through those three states as quickly as possible, a few hours each at the most with minimal rest stops, and spend the night in a state that's not on the list.That ended up being Indiana.

The two days driving home were uneventful.As I had for most of the trip, I spent most of my hours listening to Sirius radio music, comedy and talk shows, and some of the 3,800 songs I have loaded onto my van's hard drive.I visited no museums or other indoor attractions; everything I wanted to see was outside and scenic.Other than ice, I bought no groceries or ate at any restaurants.I had purchased enough bulk food to store in boxes or keep cold in my cooler.I had two large packages of bottled water that kept me plenty hydrated.It truly was a scenic trip of as near-isolation as I could get while travelling more than halfway across the country and back.