We weren't exactly The Brady Bunch but we fit the stereotype of a 1960's and 1970's family with a station wagon. I think it was in the mid-60s when my parents purchased a Dodge Dart. We certainly made use of the cargo space in the back to carry things around, and the back seat was always down on family trips. That would never go today, of course. This was back in the days when we would lay out the blanket across the whole back section. My sisters and I could lounge around with books, comic books, snacks, and sugary drinks to while the hours away while traveling.  The one thing it didn't have was the third row of seats in the back, which faced rear-ward.  My cousin's family had a station wagon like that and I was actually jealous. 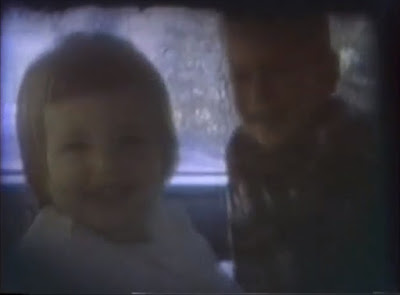 This is my sister, Nancy and me in the back of our station wagon on a trip to Lake Placid around 1964.

Our trips were frequently to the Adirondack Mountains to places such as Lake Placid and Lake George. My mother would purchase new comic books for us to read, but we were not allowed to start reading them until we got to the New York State Thruway, which was a forever-drive to me.  My dad called me a bookworm. I could not wait to get through the toll booths so I could indulge myself in the new comic books. My father sometimes pointed out sights along the way, which was boring to me as a little kid; I appreciated the sights later as I got older. We visited places such as Santa's Village, North Pole on the side of Whiteface Mountain, Enchanted Forest, the Land of Make Believe, and Gaslight Village. Many of these places are gone now. That Dodge Dart held many memories for me. It was definitely a our family vehicle.  It came to an end in the early 1970's when my dad a car in front of him. Sadly to say, it was his alcoholism that was at fault.